What’s That Antidepressant Doing to Your Sleep?

HomeInsomniaWhat’s That A...
Insomnia
By Lydia Roberts
October 4, 2021 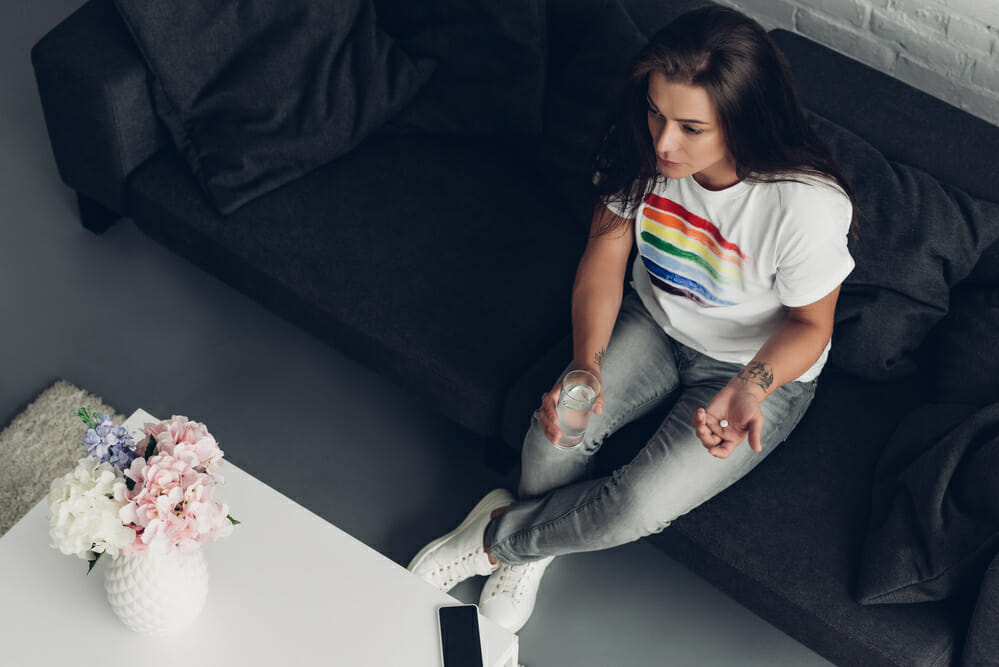 Most—but not all—antidepressants tend to suppress and/or delay REM sleep (the stage associated with dreaming). This can be helpful for people with depression.

It’s not necessarily helpful for people with insomnia. In fact, REM sleep irregularities may be a causal factor in insomnia. So it pays to know a bit more about antidepressants if you’re taking them now or before you head down that path.

Antidepressants are the third most commonly taken medication in the United States today, prescribed for depression and health problems such as insomnia, pain, anxiety, headaches, and digestive disorders. Most—but not all—antidepressants tend to suppress and/or delay REM sleep (the stage associated with dreaming). This can help people with depression.

It’s not necessarily helpful for people with insomnia—or for people who might be inclined to sleep problems if pushed in the wrong direction. There’s mounting evidence that REM sleep irregularities may actually be a causal factor in insomnia. So it’s worthwhile knowing about the REM and other sleep effects of antidepressants if you’re taking them now or before you head down that path.

Intact, sufficient REM sleep has many benefits. They include the enhancement and consolidation of learned tasks and skills in long-term memory and the regulation of emotion.

Fragmented REM sleep, in contrast, may lead to the inadequate processing of emotion and then to hyperarousal, in turn giving rise to insomnia. Loss of the final REM period, a phenomenon identified in some “short sleepers” (often defined as those who sleep less than 5 hours a night), may increase your appetite and make you more vulnerable to weight gain and obesity.

In short, reduced or compromised REM sleep is not something you generally want.

SSRIs are widely prescribed because they’re effective for depression and have relatively few major side effects. But as a class, they tend to suppress REM sleep. (They may also bring about changes in the frequency, intensity, and content of your dreams.) They also tend to delay the onset of sleep and increase awakenings and arousals at night, reducing sleep efficiency.

If you have both depression and insomnia, it’s probably best to steer clear of SSRIs. But here’s a caveat. SSRIs and other drugs that act on the serotonin system (which is very complex) are known to have different sleep–wake effects on different people. Trying out a drug like fluoxetine (Prozac) may be the only way to ascertain for sure how it will affect your sleep.

The story is basically the same for serotonin and norepinephrine reuptake inhibitors (SNRIs). Drugs such as duloxetine (Cymbalta) and venlafaxine (Effexor XR) markedly suppress REM sleep and tend to disrupt sleep continuity.

TCAs aren’t prescribed as often as SSRIs because they tend to cause more side effects. However, like SSRIs, most TCAs (except trimipramine) markedly suppress REM sleep. Also, TCAs like desipramine and protriptyline give rise to increased norepinephrine, which tends to promote wakefulness rather than sleep. In studies of desipramine, the drug degraded the sleep of people with depression by extending sleep onset latency, decreasing sleep efficiency, and increasing their number of awakenings at night.

Most TCAs are not sleep-friendly. However, low-dose amitriptyline is known to have sedative effects and is sometimes prescribed for people with depression and insomnia.

Low-dose doxepin has been shown to have sedative effects as well, blocking secretion of histamine, a neurotransmitter associated with wakefulness. Sold today as Silenor, it’s the only antidepressant approved by the FDA for the treatment of insomnia. Clinical trials suggest that Silenor is effective in treating sleep maintenance insomnia but not insomnia that occurs at the beginning of the night.

Some antidepressants are atypical in that they don’t fit neatly into any category. Although not approved for the treatment of insomnia (the requisite trials were never conducted), low-dose trazodone (Desyrel) and mirtazapine (Remeron) are often prescribed for people with insomnia because of their sedative effects. Unlike most antidepressants, these drugs have not been found to markedly suppress REM sleep. And the results of a very few studies suggest that they may help people fall asleep more quickly and sleep more deeply.