These days an old friend of mine is sliding deeper into dependence on alcohol. It’s sad and hard to watch. George stays with us twice a year while visiting his family, who live a few miles away. These family visits are fraught with discord. So by 5 p.m. George is often back at our house for the night—wine or whiskey in hand.

New research explains how alcohol dependence causes insomnia that persists for many years after withdrawal. 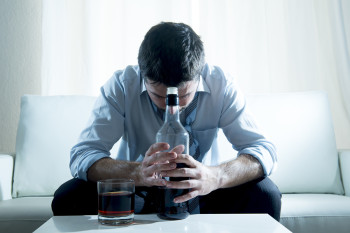 These days an old friend of mine is sliding deeper into dependence on alcohol. It’s sad and hard to watch.

This friend—I’ll call him George –stays with us twice a year while visiting his family, who live a few miles away. These family visits are fraught with discord. So by 5 p.m. George is often back at our house for the night—wine or whiskey in hand.

George suffers terrible insomnia. But you’d never know it during our happy hour, when he comes alive. He’s always ready with a toast to friends whose home, he says, is an oasis of calm next to the turbulence of his family. Toxic family relationships are George’s main topic of conversation during happy hour: his mother, a woman without much warmth whose love her sons still compete for; a bullying older brother; and a sister-in-law who stokes the rivalry already going between the brothers at every opportunity.

Visits in the Past

In the past George’s negative feelings toward his family would eventually work themselves out—helped by the Finian’s—and then he’d get around to asking my husband and me about our lives. George can be a wonderfully attentive listener. He’s also got wide-ranging interests and concerns.

A few years ago he confessed to worrying about the high doses of Ambien he needed to take to get even 3 or 4 hours of sleep. I can attest to the brevity of George’s nights. His room light has been on when I was up for bathroom calls at 1 or 2 a.m. And no sooner am I down the stairs at 5:30 than he’s in the kitchen asking for strong coffee. It doesn’t matter how wasted he feels, he says. Once he wakes up in the morning, it’s impossible to get back to sleep.

On This Visit, Changes

Our happy hour conversation didn’t get very far on George’s recent visit. Each night he glommed onto the family drama and could not let it go. Nor could he stop drinking. One night he drank a beer and then a bottle of Pinot Noir and, just as he was heading toward the pantry for more, my husband and I fled up the stairs, begging off because of tiredness. Really it was the relentless talk about his family we wanted to escape. At midnight I tiptoed downstairs to adjust the heat and there was George, still drinking and talking on the phone.

In the morning, he came down behind me for his coffee. But when I put the water on, he changed his mind: he was going back upstairs for a little more shut-eye, he said.

That’s odd, I thought to myself. Never in all his other visits had George gone back to bed. Once he was up, he was up for good. My hunch was that he’d taken a sleeping pill quite a bit later than usual and, deciding it wasn’t working, got out of bed only to be hit by sudden sleepiness when the Ambien finally kicked in.

Reflecting on the Situation

George’s situation has taken a turn for the worse–there’s no denying it—and this is upsetting enough. But when I consider what lies in store for him, no scenario I can imagine looks good.

Continuing to drink at the level he’s drinking now is compromising his overall health, and plainly it’s hurting his sleep. But new research shows that even if George does someday go in for alcohol treatment, his sleep may be irreparably harmed.

Adenosine is a neurotransmitter important to sleep, and it’s through adenosine that alcohol exerts its effects on the sleep-wake system, say researchers at the University of Missouri, following a series of lab experiments. In rats never before exposed to alcohol, a single dose resulted in the rats falling asleep more quickly and sleeping more deeply. It did this by increasing available adenosine in the rats’ basal forebrain, an area crucial to sleep. In turn, the adenosine suppressed the activity of wake-promoting neurons there, thus promoting sleep.

But in rats habituated to alcohol, withdrawal from alcohol had the opposite effect. It resulted in the rats experiencing significantly more wakefulness during both their activity and sleep periods–behavior that mimics the severe insomnia experienced by humans during acute alcohol withdrawal.

Excessive wakefulness would normally lead to a robust build-up of adenosine in the basal forebrain. But during alcohol withdrawal this did not happen in the rats. Sustained use of alcohol down-regulates the adenosine system and blunts the sleep system, the researchers concluded, making it harder to fall and stay asleep.

It’s not just during acute withdrawal that alcoholics experience poor sleep. Clinical studies have shown that sustained withdrawal from alcohol in humans causes insomnia and sleep fragmentation for years to come.

My blog topics are usually more uplifting. But the only word for the story on alcoholism and sleep is bleak. However you choose to manage your insomnia—whether it’s CBT, meditation, sleep aids, alternative treatments or some combination of these–steer clear of alcohol, a harmful soporific close at hand.

4 thoughts on “Alcohol and Sleep: A Cautionary Tale”

Leave a Reply to Tired and annoyed Cancel reply